REPRINTED FROM THE DAY PAPER. 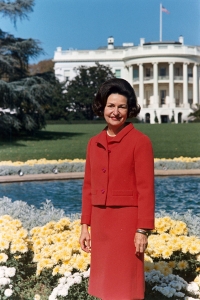 Jackie Kennedy made herself a beautiful woman, but Lady Bird Johnson did her one better. She made a beautiful America — or at least tried.

The 1965 Highway Beautification Act, which her husband, Lyndon Johnson, pushed through Congress at her insistence, dramatically limited billboards alongside federal highways. The billboard industry since has bored enormous loopholes into the restrictions — witness the monsters now sitting atop tall monopoles and visible half a mile away.

The uglification continues, except where the people have put their foot down. Four states — Vermont, Hawaii, Alaska and Maine — ban billboards altogether. Although North Carolina permits billboards, Craven County has just passed laws that strictly regulate their placement and bans animated signs altogether. So states and municipalities do have the power to slow the onslaught, though the outdoor advertising business will fight them at every intersection.
New Hampshire and Vermont are both beautiful states, but when you cross from the former into the Green Mountain State, things feel different. For one, you notice the green mountains. For another, you sense something missing but not missed — the giant billboards that clutter what should be equally fine views in New Hampshire.

And Vermont has not let its tourism industry down. Posted along its roads are carefully designed brown signs that point visitors to every motel, diner and pottery shop in the state. These actually make it easier to find businesses than huge billboards towering over barns.

Before Lady Bird caught everyone’s attention, few Americans thought much about the wildflowers that lit up America’s roadsides — and still do in places not paved over. She cherished the Texas Hill Country, where every April ignites a bluebonnet extravaganza that’s become its own tourist attraction. And in saving wildflowers she also helped preserve the bird habitats they provided.

The losses are heartbreaking, and the battles continue. A relatively new threat is the cell tower invasion. You can’t easily hide a 150-foot cell phone tower, though some have been cleverly placed in church steeples and dressed up with fake branches to look like trees.

The big telecom bill of 1996 lets the Federal Communications Commission overrule local efforts to ban cell towers. But the locals fight on. In May, Tennessee lawmakers got the FCC to at least stall the building of a tower that would have marred the view from the Chickamauga and Chattanooga National Military Park, a Civil War site.

Tower skirmishes rage on in parts of northern New England, where cell service is not universally available. Maine Sen. Susan Collins complained that she was in Millinocket, Maine, a dead zone, when the Department of Homeland Security tried to reach her. The good news is that although she had to drive 20 minutes to get service, America was spared an attack. (And they do have land lines in Millinocket.)

I, too, have suffered recent cell phone deprivation, in northern Vermont and the panhandle of Nebraska. I, too, survived it, and after the initial shock wore off, enjoyed the quiet.

The Highway Beautification Act was passed around the time of Johnson’s gallbladder operation. At the signing, he waxed poetic about the nature he saw along the George Washington Memorial Parkway as he returned from the hospital. “Not one foot of it was marred by a single unsightly manmade obstruction,” he said. “No advertising sign, no junkyards. Well, doctors could prescribe no better medicine for me.”

Rather than dwell on what Lady Bird couldn’t accomplish, let’s ponder how worse things would look had she not tried. Jackie’s beauty lives on in picture books, but Lady Bird’s glows along every roadside where wildflowers bloom. That’s really something.

Froma Harrop is a syndicated columnist.