The only downside of a bird-friendly landscape 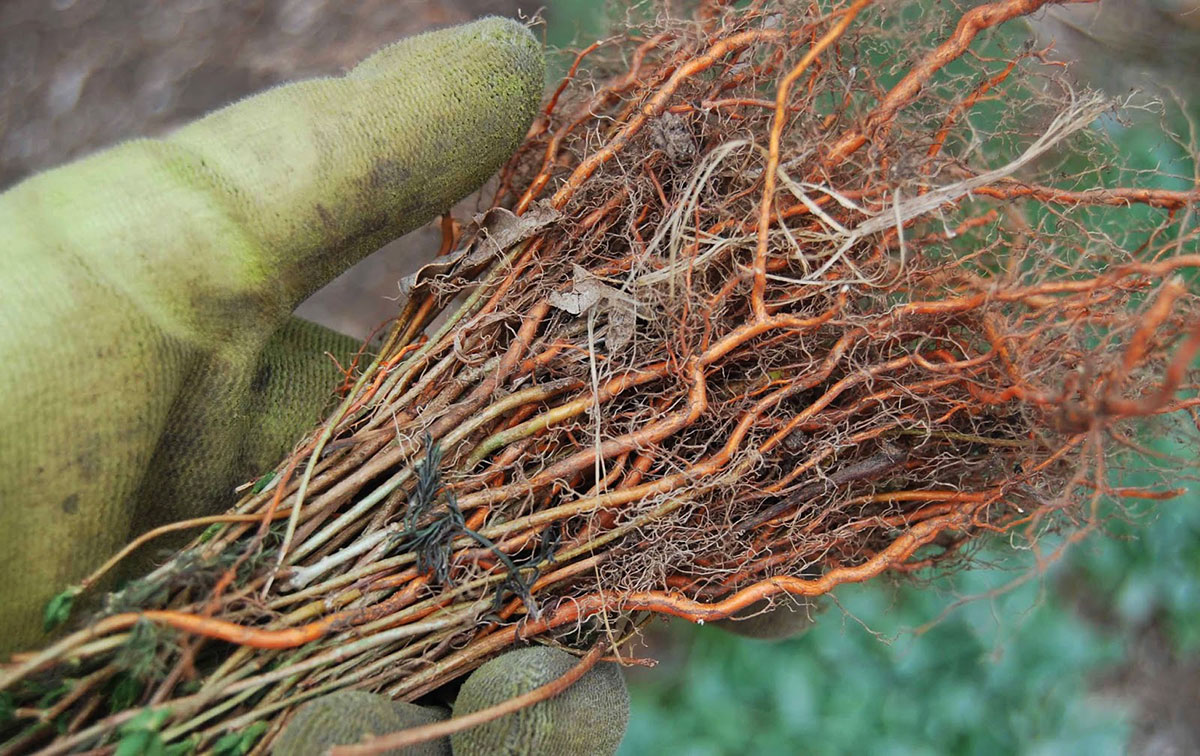 This thick handful of Oriental bittersweet seedlings was growing under bird-feeders.

One of the greatest satisfactions of being a gardener is seeing the birds, bees and other pollinators enjoy your flowers as much as you do. But when the birds are gobbling the seeds and berries you’ve encouraged, they are also making their own, ah, deposits. So it’s important to check the soil under trees, shrubs, fences and bird feeders for the uninvited residue of those bird visits. Early spring is a great time to find seedlings, before perennials fill out and hide the invaders.

Invasive plants are often the first to leaf out, frequently ahead of more desirable shrubs and vines. That habit can make it a little easier to find the unwelcome weeds while they are small enough to remove easily. Hands and knees weeding can yield great results this week, in between the bouts of much-needed rain.

Oriental bittersweet (Celastrus orbiculatus) is the vine that creates a massive tangle, draped from even the tops of trees along highways and roads. It has pretty red and yellow berries in the fall, much loved by birds, which are a main way the plants spread. It also has bright orange roots, so you’ll know instantly if you’ve pulled out an invader. The handful shown in the photo was growing under a bird feeder and took only minutes to remove. Wait a couple of years, and these little thugs would be big enough to strangle trees.

Some other bad actors

Garlic mustard is growing explosively in New London right now. It has small white flowers and corrugated, heart-shaped leaves. It spreads by seed on its own, and doesn’t need help from birds. Pull it before it sets seeds. You’ll know it by its rank, onion/garlic smell when you bruise the stems or leaves. Pull every leaf you see, or your yard will be overrun in short order.

We can’t blame the birds for Norway maple seedlings—the winged seeds helicopter in on the wind. If you live in New London, there is probably a Norway maple within a few feet of your house. Thousands of seedlings seem to sprout every spring. Pull those while they’re babies, before you need loppers or a chain saw.

Privet, also spread by seed, is another pest emerging now. Yank it out when it’s tiny. Privet was widely used as a hedge because it’s easy to shear and grows prolifically.

Barberry is a common garden plant, one of the few shrubs totally impervious to deer. It is well armed with painfully sharp spines, so it can be difficult to remove when it gets large. Birds spread it by seed. Another armed invader is the multiflora rose, which can form massive thickets. It has charming small white flowers and loads of hips, the seeds much enjoyed by birds. Some species of barberry are still available for sale in Connecticut, but have been banned elsewhere. You’ll never find anyone selling multiflora, but it came to the U.S. for use as rooting stock for garden roses and managed to escape.

Honeysuckle is another example of an invasive that is very early to leaf out—in fact, it’s just starting to show flower buds in New London this week. Birds enjoy its succulent red fruits in summer, spreading plants far and wide. There are several species of shrubby honeysuckles that are problematic. They have fragrant flowers and a single shrub doesn’t seem that troublesome, but one becomes hundreds within a few years. And that’s a potentially big problem. 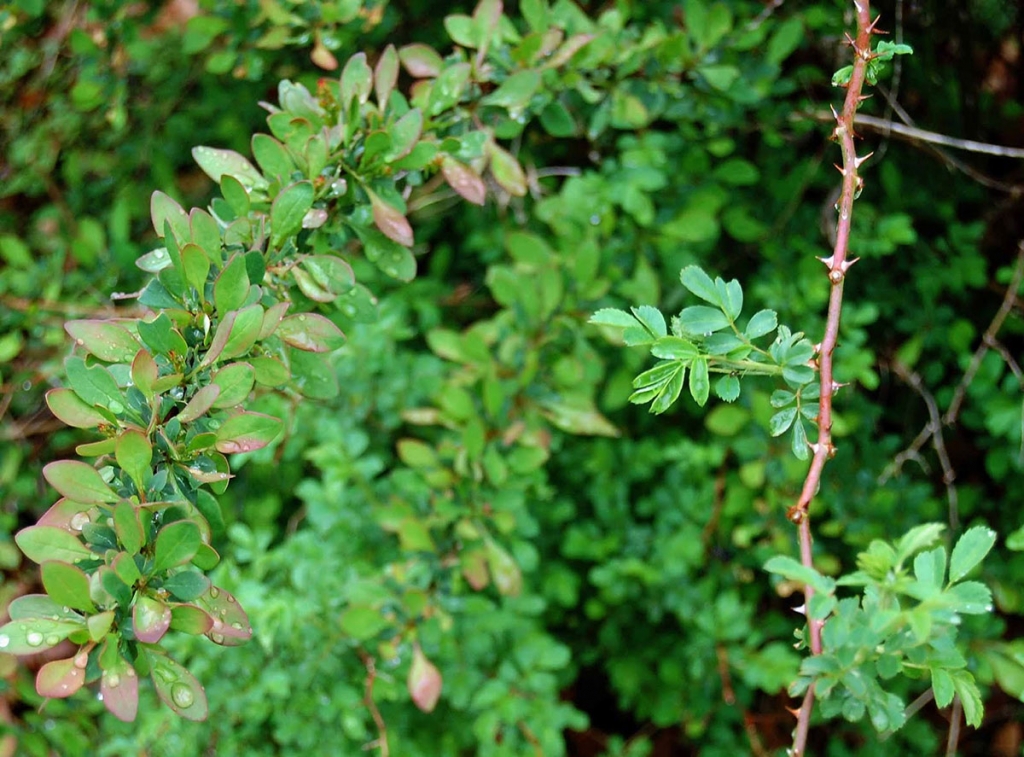 Self-sown barberry, on the left, growing into a thicket of multiflora rose, on the right and in the background. 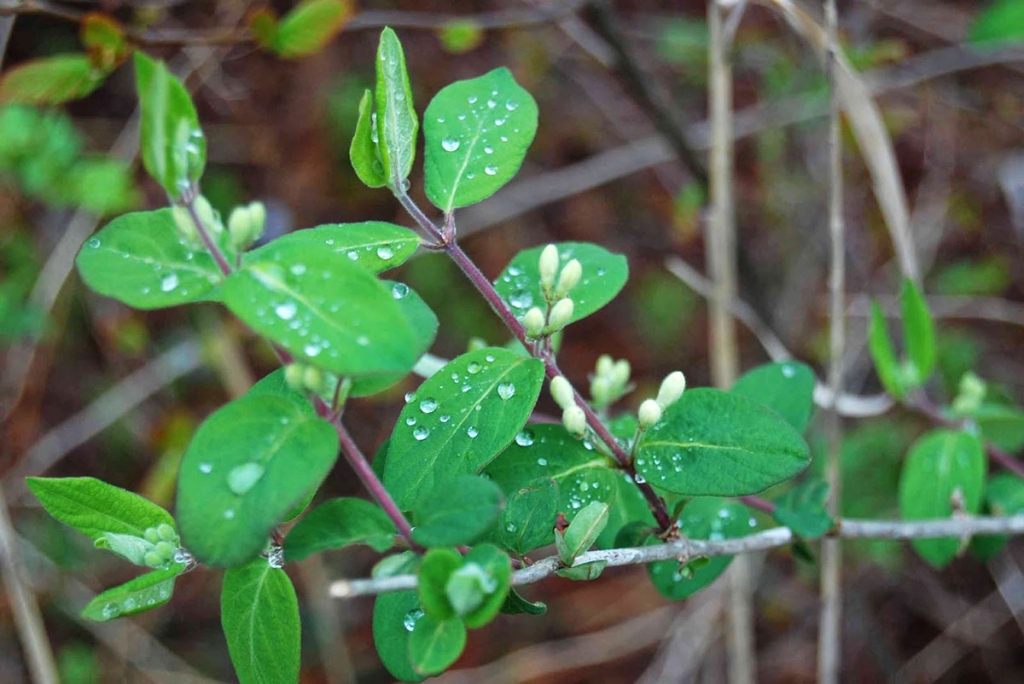 A shrubby honeysuckle is about to bloom.

A native vine, trumpet honeysuckle (Lonicera sempervirens), is not a pest. It’s a strong grower, tolerates some shade, and is beloved by hummingbirds. Train one on an arbor, very sturdy trellis, or along a fence. ‘Major Wheeler’ is a gorgeous selection, with clusters of bright red blooms.

Find photos of trumpet honeysuckle and many other highly desirable shrubs, vines and perennials at American Beauties Native Plants, a Connecticut-based wholesale grower of native plants.

Not sure if a plant is your yard is desirable or a thug? Find photos and descriptions of common invasive plants at invasive.org